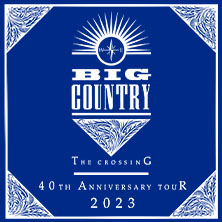 In honor of its 40th anniversary tour, the rock band Big Country, founded in Dunfermline, Scotland in 1981, will arrive in Finland for a four-concert tour in February 2023. The band will perform concerts in Oulu, Tampere, Helsinki and Hyvinkää.

The music performed by the band is solid basic rock, but rhythms borrowed from Scottish folk music and even march music and sensual instruments such as bagpipes and various flutes give it a distinctive character. Big Country’s style has been described with the name Celtic rock, referring to Scottishness.