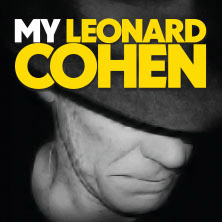 MY LEONARD COHEN -THE TRIBUTE CONCERT

Leonard Cohen is remembered for such songs as “Suzanne”, “Bird On The Wire”, “Famous Blue Raincoat”, “The Partisan”, “I’m Your Man”, “First We Take Manhattan”, “Dance Me To The End Of Love”, “Tower Of Song” and “Hallelujah”. Cohen died at the age of 82 on November 7, 2016 in Los Angeles, USA. Cohen performed seven times in our country, the first time at Helsinki’s Kulttuuritalo in February 1985 and the last time at Sonera Stadium (now Bolt Arena) in September 2012.

The “My Leonard Cohen” performance, which can be seen in the small hall of the Tampere building on Sunday 7 May 2023, is a tribute concert by singer-pianist Stewart D’Arrietta and his ensembles interpreting Cohen’s most famous songs.