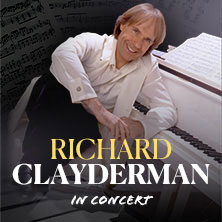 World-famous entertainment pianist Richard Clayderman will give a concert in Tampere-talo on Thursday, March 9th.

Born in France in 1953, Clayderman (originally Philippe Pagès) started playing the piano as a child under the guidance of his piano teacher father. Already at the age of six, Clayderman is said to have been able to read sheet music better than his native language, French, and Clayderman won his first grand prize in a piano competition at the age of 16. Classical music took a backseat with the million-selling Ballade pour Adeline single in the late 1970s.

Clayderman, who has had a long career, is one of the world’s most popular light music pianists. The charming musician has sold more than 90 million albums and been awarded more than 340 gold and platinum records. Clayderman, who last performed in Finland in 2017, has performed in more than 2,800 concerts in his career and performed in e.g. With the Royal Philharmonic Orchestra of London and the Tokyo Symphony Orchestra. In March, it’s the turn of Finnish Clayderman fans to enjoy.