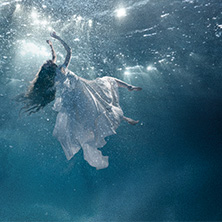 WAGNER’S FLYING DUTCHMAN WILL STORM THE TAMPERE OPERA IN FEBRUARY 2023
The premiere of the opera is at Tampere-talo on Friday 10 February 2023.

The piece is directed by Marika Vapaavuori, an experienced theater director making her operatic debut. The Tampere Philharmonic is conducted by the German conductor Anja Bihlmaier. The production is designed by Marjatta Kuivasto and the costumes by Leena Rintala. Ville Syrjä is in charge of lighting design. Choir conductor Heikki Liimola is in charge of coaching the choir of the Tampere Opera.

The performance language of the opera is German and the work is subtitled in Finnish and English.
There is an intermission in the show.