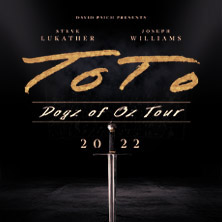 The 5th of August 2022, Tampere will host a new outdoor event, headlined by Toto, who has sold more than 40 million albums in his career. The concert is part of the band’s Dogz of Oz tour. The one-day event in Sorsapuisto, will also feature Hard Rock bands Brother Firetribe (FIN) and H.E.A.T. (SWE).

Alongside guitarist Steve Lukather, one of TOTO’s founding members, and Joseph Williams, who has been the band’s soloist since the 1980s, will be bassist John Pierce (Huey Lewsis and The News), drummer Robert ‘Sput’ Searight (Ghost-Note / Snarky Puppy) and keyboardist/backing vocalist Steve Maggiora (Robert Jon & The Wreck). Toto last performed in Finland in summer 2019 at Pori Jazz.

Tickets 69,90 €
VIP-tickets 159,90 €
The VIP ticket includes a concert ticket to the festival and a delicious buffet meal inside Tampere Hall. In the park, you will have your own restaurant and sanitary facilities. The VIP ticket also includes VIP host services and a VIP pass with lanyard.

The concert is not allowed for people under 18 years old.