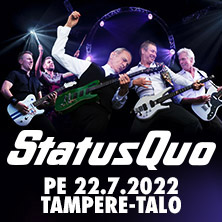 Rock Icon Status Quo is performing at Tampere Hall. Since 1962 Francis Ross, a founding member and guitarist has lead Status Quo through six decades.  In 2022 the other band members are keyboardist Andrew ”Andy” Bown, bassist John ”Rhino” Edwards, drummer Leon Cave and Irish guitarist Richie Malone who  came to the band in 2016 when Rick Parfitt passed away.

Status Quo is a legend, the only band who has been in Top20-singlelist in Great Britain for five decades. Over 118 million sold records and thousands gigs. And still going strong. Come and enjoy rhythms and sounds of rock.

No interlude or age limit.

Changes to this event are possible.